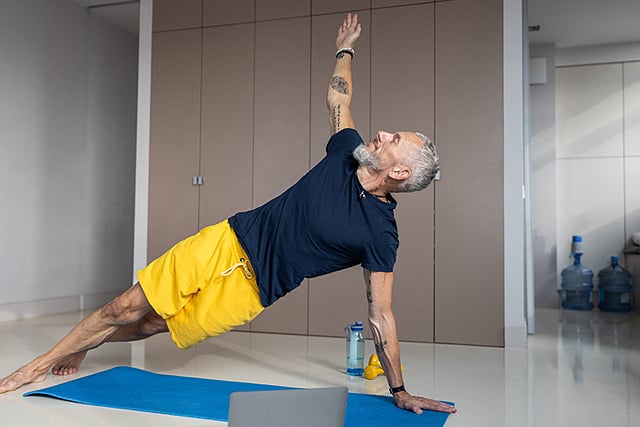 Strangely I had never heard of the term “manopause” until recently. Menopause is a very well-known stage of a woman’s life that has been widely documented, addressed, and discussed. Most of us probably know or have known, at least one lady (probably many more) who has voiced their displeasure in going through this experience. And yet while growing up, I had never heard of men addressing their immense decline in testosterone and how it affects their energy levels and physical strength. Maybe the stoic men of previous generations didn’t really talk about how they “feel” in any way. Or maybe they didn’t want the younger men to know that they have physically weakened. But it should be talked about! Coping with low testosterone can be challenging.

Manopause is real! All men age, and this decline of testosterone is part of aging. Like menopause, this is a natural condition and not a disease. Yet, due to some unpleasant side effects of this stage of life, you could easily be convinced that there is something “wrong” with you and try to seek treatment.

Like many other situations, pharmaceutical companies take advantage of your naivety and vulnerability by pushing their drugs. The doctors prescribing are either naïve or complicit. Why? Well, because there is a lot of money to be made. Drug companies don’t shy away from making a buck even knowing there is a risk to your well-being. As a matter of fact, if you saw the rap sheet of a drug company you would probably agree that it's a criminal operation. For them, the lawsuit they’ve lost is simply a “cost of business.”

Sometimes men’s naivety and vulnerability leave them confused and feeling defeated. They don’t know precisely how to cope with this. They don’t understand why they should not be treating this condition with the drugs the pharmaceutical companies are pushing. It becomes more difficult when the pharmaceutical companies have specially designed commercials to convince people these treatments are not only safe, but will give you back the youth you so desperately desire! According to the American College of Physicians, testosterone therapy should NOT be given to treat manopause and there are many health risks.

I’m sure for some men, the process of declining testosterone levels is so gradual that adjustment and acclimation are easier and considered more natural like their greying hair. Yet, for many men (myself included) manopause hits like a ton of bricks. This almost shocking experience may add to some idea that there is something wrong.

Because of my usual level of physical exertion, the drop in my testosterone became glaringly apparent. My normal 1 ½ hour vinyasa yoga routines became more and more challenging and inappropriate. Running around with my 5-year-old boy, who I had at the age of 52, became more complicated, and I became much more prone to injury since part of the process includes the loss of tissue elasticity. I even felt some internal resistance to my morning walks. Initially, I felt so drained of energy. I felt like I was dragging myself out of bed and through my days. I didn’t know what was going on, but like everything in life, things come and go, so I just observed this experience to see if this was just something (like illness) that I was passing through.

Eventually I realized what was happening and allowed myself to surrender to my body’s natural process (even for the time being skipping my morning walks) and just kept observing my condition.

This condition lasted around 12 to 18 months. It was very challenging because I have young kids and my heart desires to be physically involved to a great degree. Others may be more attached to their youth and their youthful prowess which creates another type of challenge; dealing with their attachments to being/staying young and all the activities they had been enjoying. The main challenge, though, is the severe drop in energy as that really affects everything.

I’m about 53 years old, and I’ve been hit with this sudden drop in energy. I’m watching or observing my situation as if I was a third party watching someone go through this. Observing things instead of reacting to things has been an incredible asset I gleaned through my vipassana meditation practice. I couldn’t even begin to describe the number of ailments, pains and other physical (and sometimes psychological) issues I’ve been through that I just lived with and observed...and 99 out of 100 times the issue eventually disappears. My guess is most people would have visited a doctor if they had any one of my issues and possibly been prescribed some medication or injected with a steroid. Maybe that’s why I read somewhere that 50% of all doctor visits are unnecessary. Anyways you get the point. I just watch this manopause unfold.

After these 12 to 18 months, something interesting happened. I started to feel better!

I don’t mean I felt like my prior normal (those days are gone). But I adapted and recalibrated to a new paradigm. Here’s an example of what I mean: “After spending a long time in bright sunlight I entered a fairly dark room and could barely see but after spending some time within this room my eyes adjusted or recalibrated and I could actually see almost everything (save for any small print) just fine. Sure, it’s not as bright as it used to be in the sunlight but after my acclimation period I can get along just fine”.

My yoga asana practices are shorter now, and my style leans more toward gentle and yin, and my morning walks are back in full force. I have allowed myself to go through my natural process, made the adjustments I needed to make, and have come out just fine.

I’d be lying if I said I didn’t think once or twice about those low T commercials trying to sell me testosterone therapy and capitalize on my crappy state, especially when I was really in the thick of things. It’s not easy to go through that, it’s not easy to let go of what once was, but I’m glad I did. It’s been said, “the right decision is never the easy one.”. Somehow, I feel it’s been healthier for me to intervene in this aging process as little as possible while continuing to take care of myself as best as I can!

I hope this was helpful.