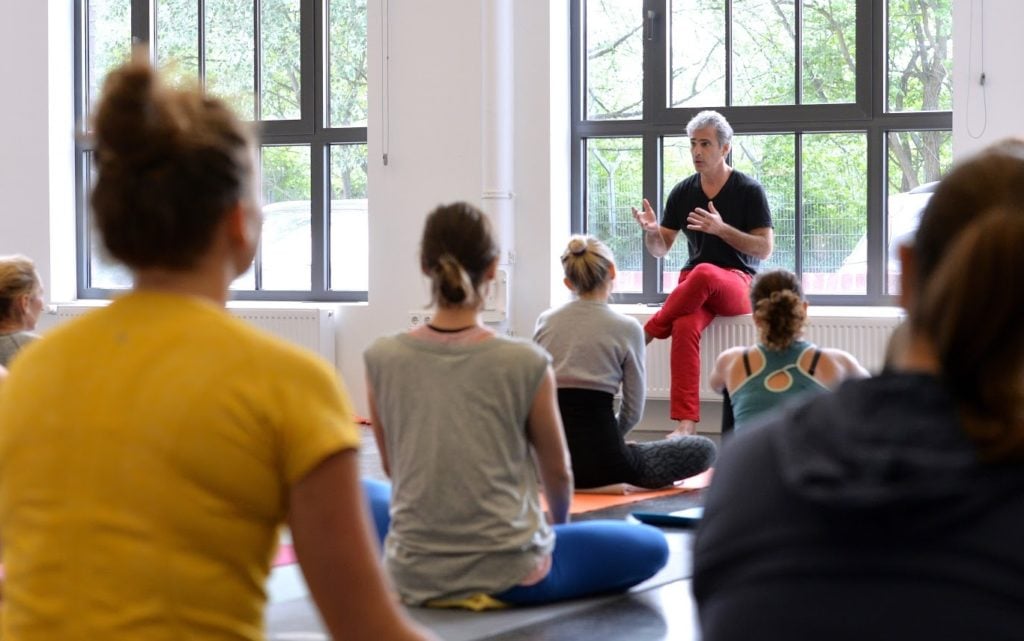 What is Hatha yoga? If you google "hatha yoga definition", you will get a wealth of info with lots of ancient texts, Sanskrit words, saints and sages and mythology. The Hatha yoga description can be complicated, contradictory and super interesting if you are into that type of stuff.

How to Define Hatha Yoga

I’d like to define Hatha yoga according to my almost 40 years of experience practicing it. I’d also like to mention some of the benefits of Hatha yoga. Hatha yoga may well have a different meaning to different people and especially to different cultures. In India, Hatha yoga may include more philosophy and esoteric practices. Here in the West, Hatha yoga has been narrowed down to physical exercises called asanas. Tirumalai Krishnamacharya was an Indian yoga teacher. Often referred to as "the father of modern yoga," Krishnamacharya is widely regarded as one of the most influential yoga teachers of the 20th century and is credited with the revival of Hatha yoga.

Although krishnamacharya did not travel to the West, two of his students did, Pattabhi Jois and BKS Iyengar. These two people are basically responsible for the popularity of Hatha yoga and yoga itself in the West. Iyengar basically wrote the Western Hatha yoga bible, "Light on Yoga," which opens with a beautiful introduction which I highly recommend reading. Then he goes on and describes many poses along with their benefits and Sanskrit name, adding little philosophy. Pattabhi Jois brought us Ashtanga yoga, which is an intense 4 sequences (later to become 6 sequences) of about 35 asanas each sequence, which is at least 200 asanas. This style offered absolutely no philosophy other than "If you practice this, all is coming." I lived with this guy for a year in India. Ashtanga yoga is virtually single-handedly responsible for every vinyasa or flowing yoga class in the Western world, which are offshoots of Ashtanga yoga. These flowing classes take their alignment cues from Iyengar, and function was his specialty. Because of these two, Hatha yoga became primarily known as a physical exercise.

The Hatha yoga benefits may be many for sure, but what I’ve discovered is that there are equally as many Hatha yoga detriments. This is why understanding yoga’s philosophy and approach is essential to performing these asanas in a beneficial manner, which ironically, Pattabhi Jois and BKS Iyengar did not emphasize. You can stay within Hatha yoga’s benefits and away from it’s detriments by simply practicing these asanas or postures in a gentle or moderate and non-competitive manner. My feeling is this is how you get the benefits of all exercises. Hatha yoga will certainly give you the benefits of most other exercise, which is muscular tone and suppleness (connective tissue as well), stamina, cardio and balance. It also benefits the endocrine system, nervous system and enhances our mood. If you google the benefits of Hatha yoga or simply exercise, you will read all this and much more or watch a hatha yoga video. Exercise in general is a powerful tool for today's sedentary lifestyle.

What I really appreciate is Hatha yoga’s logical attempt to care for every nook and cranny and every range of motion. Everyone knows you cannot take care of something you do not touch and it’s only in Hatha yoga that there is an attempt made to touch it all. That touch stimulates nutrient-rich circulation to every nook and cranny, which is the prerequisite for regeneration. Hatha yoga is not a great tool towards peak performance (other than aiding in injury prevention), yet it is an amazing tool toward wellness and the most complete exercise I have ever seen.

This is why we use Hatha yoga here at Santa Monica Power Yoga & Meditation.