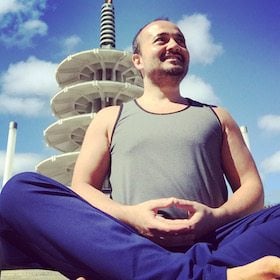 Brian Gallo believes in the ancient wisdom of Larry David. “Whatever works.”

“If your practice helps you create great outcomes in the real world, off of your cushion and off of your mat, then keep doing it.”

Born in Boston, Brian discovered both yoga asana and sitting meditation in his early twenties, and has been practicing both ever since. Brian first moved to LA in 2003. And his very first yoga class in LA was at the Power Yoga West Studio.

“I’ve heard it said many times, and it’s true, everyone’s first stop in LA is to go see Bryan Kest… and in one 90 minute class my perception of LA completely shifted. After having lived in several different big cities, I finally felt like I was home.”

In 2007, Brian sat the 10-day Silent Vipassana in Chennai, India. After that, he immediately began teaching yoga to children at a Primary School outside Pondicherry. After five months in India, he returned home to teach children’s yoga as a volunteer in Santa Monica.

Besides meditation, Brian is a certified yoga teacher and a practitioner of evolved-NLP. He also runs an Investment Fund and credits his meditation practice as the primary driver of its success.

He is beyond stoked to be sitting with you and back home at Santa Monica Power Yoga.

Zen principles in plain English. In this practice, we’ll create some internal space and begin to retain autonomy over our...